Each year the Exploring More group picks a topic that will guide their shared studies.  This past year the group decided to consider "designing from inspiration" rather than working on weave structure.  After much discussion the concept of "traces" was chosen as the inspiration.

Traces are those remainders or distrubances of the natural environment that signify that something or someone existed in a place and time but is now gone.  The memory of their passage can be found in deliberate modifications (a stone grouping) or the incidental change in the environment (a broken twig).

This was a difficult challenge at first. It took some time to move from the general concept of "traces" to a concrete concept that could be translated into purpose, materials and weave structure.  It helped to have a group to share ideas with.  In spite of the sharing the final results are quite different interpretations of the same theme.

The inspiration for this scarf, in a mixture of yarns, was the remains of an aboriginal fish trap in the Kus-Kus-Sum watershed.  The undulating twill pattern mimics the outline of the fish trap.  The weaver had visited the site during its restoration.

A second member of the group was inspired by an old bird's nest.  The nest was made out of bits of vegitation so the weaver decided to use a mix of textured cellulose fibres that she dyed with natural materials.  She wove two scarves in neutral shades.

A scene with a set of old fence posts receding into the distance became the basis for a set of stripes in a tea towel design.  The cotton tea towels were done in crackle.
But the weaver had also seen some tumbleweed caught on the fence and that inspired a silk shawl in a tied weaver (Bergman).  The surface has a fine diamond pattern characteritic of a Begman piece.
The next piece was inspired by a walk on the beach during low tide.
The exposed sand carries traces of many creatures that roam the intertidal area including people and pets.
Some of the most fascinating characters are the crows that scavenge and dig for clams.  But soon the tide turns and the creeping water slowly obliterates all traces of activity.
The photo inspired a long runner in summer and winter.  The tracks gradually fade towards the end of the piece.
Some traces are more permanent than foot prints in the sand.  They may only be a hint of the original source but they remain as stories, cultural influences, a hint of likeness or even the stuff of life itself, DNA.
The next series of pieces evolved from an interest in family origins and genetic testing.  The weaver was curious about her forebearers and had learned that her DNA profile included links to England, Scotland and Ireland.  She decided to weave a series of heirloom linen table mats using a modified satin threading.  She chose white, blue and green to represent the mixing of genes.
Sometimes we see beauty in things that wouldn't normally be viewed as a positive thing.  Take for example the next scarf with silver white in-lay.  This item was inspired by the sun glinting off a slug slime trail across a black garden mat.  We might be too busy hunting down the pest to stop and admire the shiney silver stripe it left behind.
The final piece represents something of world wide concern, the melting of polar glaciers.  Glaciers once covered much of this earth where only traces of their existance can be seen as a morain, scour marks on bedrock and submerged land bridges.  The rate of melting is increased in the presence of snow algae that create red rings or water melon ice.  This prompted the colours in a huck lace tea towel, dark blue for the ocean, red for the algae and white for the remaing ice.  The white/blue mix represents the melting water moving into the ocean.
The Exploring More study group has turned its attention to a new topic.  What can you weave when you combine the effects of a weave structure with yarns that have different elasticity, energy or shrinkage???  Look forward to seeing, puckers, bumps, pleats and more surface effects.
Posted by Qualicum Weavers and Spinners at 10:16 AM No comments:

After a brief hiatus due to Covid our beginner harness loom weaving classes have returned.  We keep the class size small so that each student has their own loom and plenty of one on one instruction.  The beginner program covers the very basics.
They learn to turn a cone of yarn into an ordered set of threads (the warp) then to dress the loom with that warp.

Once the mystery of tying knots, sleying heddles and rolling on has been demystified they get to stomp on treadles and throw shuttles.

Then the magic happens.  They make cloth, their own unique cloth.  Well, they make mug rugs.  But the size of the piece doesn't matter.  It's the thrill of exploring combinations of yarns and colours to create a fabric that is your personal expression of textile art.  That is why we weave.  Mug rugs can be thick and colourful, subdued with stuble patterning or natural and textured.

Our beginner groups have been so keen this year that we offered a beginner level 2 that allows students to build on their knowledge and explore pattern and different designs.  They learned to create more complex warps, work on designs for stripes and even look at different weave structures.
After the instructional part of the workshop students have time to work on their individual pieces.  Normally there is plenty of time to weave but recently work was interupted by a massive power failure.  Our keen class decided to weave on by the light coming through the doorway and windows and with the help of a useful accessory.  Note the warm clothing.  It was cold as well as dark.

But now a different beginner group has taken over the studio.  Knitters!

Posted by Qualicum Weavers and Spinners at 8:18 PM No comments:

The Qualicum Weavers and Spinners Guild has been part of the Oceanside artisan community since 1991. The guild evolved from a small group of students of noted local weaver Elaine Duncan to over 50 members. The group promotes the fibre arts through information sharing, demonstrations and workshops. The group meets the fourth Monday of the month at Qualicum Commons in Qualicum Beach to exchange ideas and learn. Much of the learning occurs in the form of show and tell with individual artisans sharing their experiences. Study groups, workshops and mentoring all support the guild's goal of fostering personal growth in the fibre arts. The guild is a member of the Oceanside Arts Council, The Association of North West Weaving Guilds and the Guild of Canadian Hand Weavers.
Guests are welcome to attend our monthly meetings. For the schedule see Guild Events.
If you are interested in joining the guild please contact us by email as we are meeting on-line and access to our studio is restricted.
CONTACT us at
qualicumweaversspinnersguild@gmail.com

Elegant Threads is the annual show and sale of the Qualicum Weavers and Spinners Guild.  It features one of a kind hand crafted items created by our talented members.  It takes place in November.  Watch this space for more information.

Some of members sell directly to the public so if you missed our annual sale and are looking for something unique in the way of table linens, fashions or accessories check out our market place for hand crafted fibre arts.

Double Rainbow, a mix of colour theory and double weave. 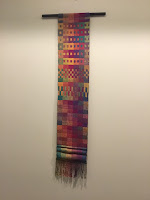 Create magical effects using multiple colours in rotation using double weave blocks.  This is an on-line course, four 1/2 day sessions.  You'll weave along in the comfort of your own studio on your own 4 or 8 harness loom.  The instructor Jennifer Moore is well known for her publications on double weave and her fantastic art works.

Cost: members $275, non-members $ 325.  Note that to hold a space there will be a non-refundable deposit of $150.  Material kits will be available at an additional cost.

Weaving Sow's Ear to Silk Purse?:  Finishing and fixing bloopers or how to prepare your weaving for sale.

This in studio seminar will cover finishing, how to repair (and avoid) errors and tips on producing and presenting a high quality woven piece.

Cost:  Free to members but you must be registered in advance.

To register or for more information contact Gillian Best at courseregistrar.gwsg@gmail.com

General Meetings, We are not holding general meetings in person at this time. These meetings will take place via Zoom.

The following are some of our regular group events

2nd Wednesday of the Month 10 am to 1 pm, Fun with Four Weavers.  Contact J. Worboys for more information.

4th Thursday of the month 1:30 pm to 3:30 pm, Exploring More Study Group. This group is working on designs based on the theme, "traces" and is meeting via Zoom. Contact P. Collins for more information.

Current Covid safety procedures apply to any activities within the studio.  Information will be circulated to members by the secretary. If you are a non-member and are interested in attending a meeting contact us via our email