More than Four Reporting In 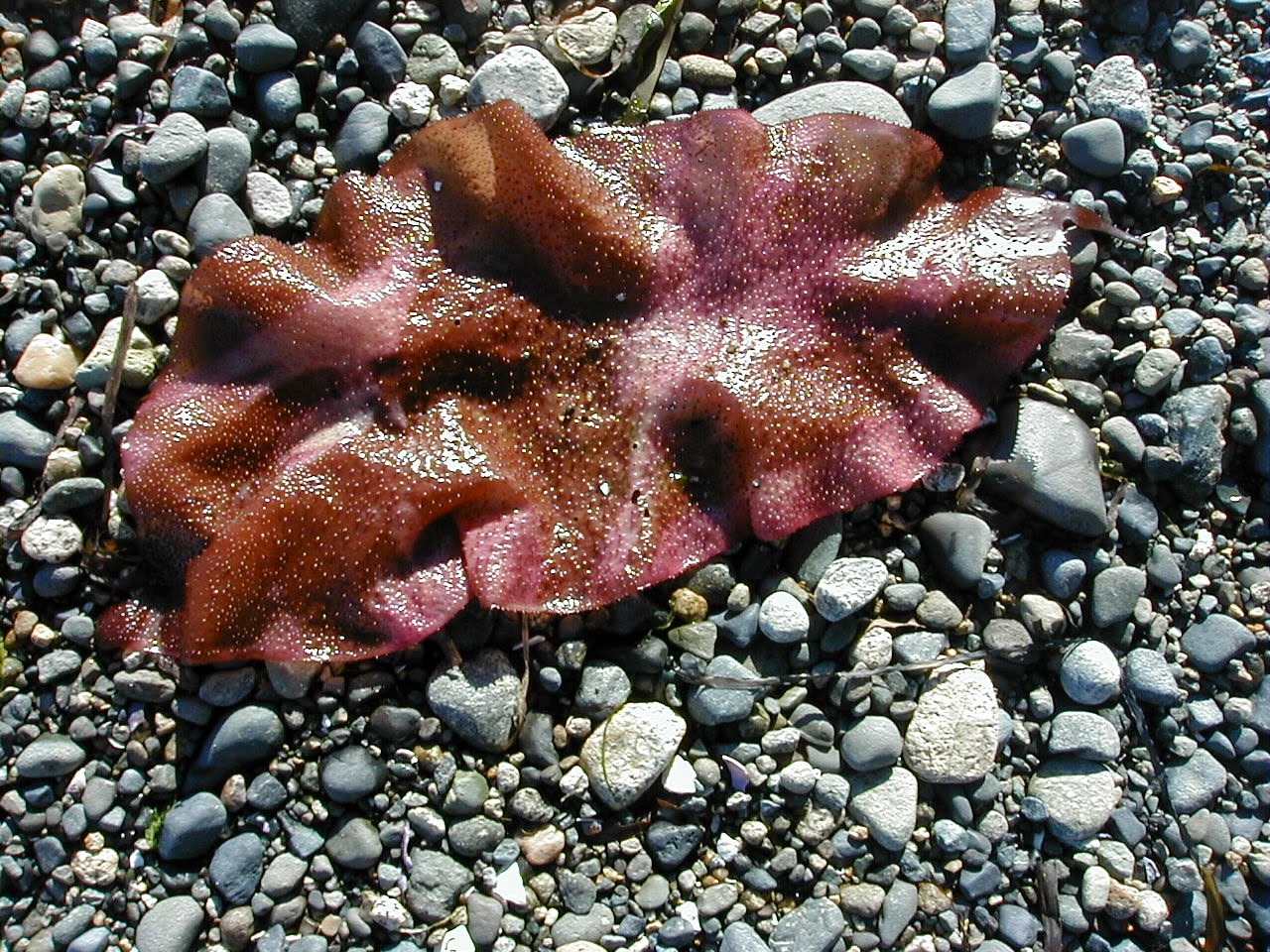 The More Than Four Study Group is a weaving study group for  guild members who are interested in making the most out of multi-harness looms.  At the start of the year the group selects a study topic and for the rest of the year members research and weave samples related to that topic.  This year the group decided to concentrate on creating 3 dimensional surface effects.
We soon learned that there were a variety of surface effects that could be created by a hand weaver.  They could be subtle all over surface effects with raised yarns or dimples.  They could be strategically placed pleats or puckers or they could be wild waves and ruffles resulting from movement across the entire fabric. 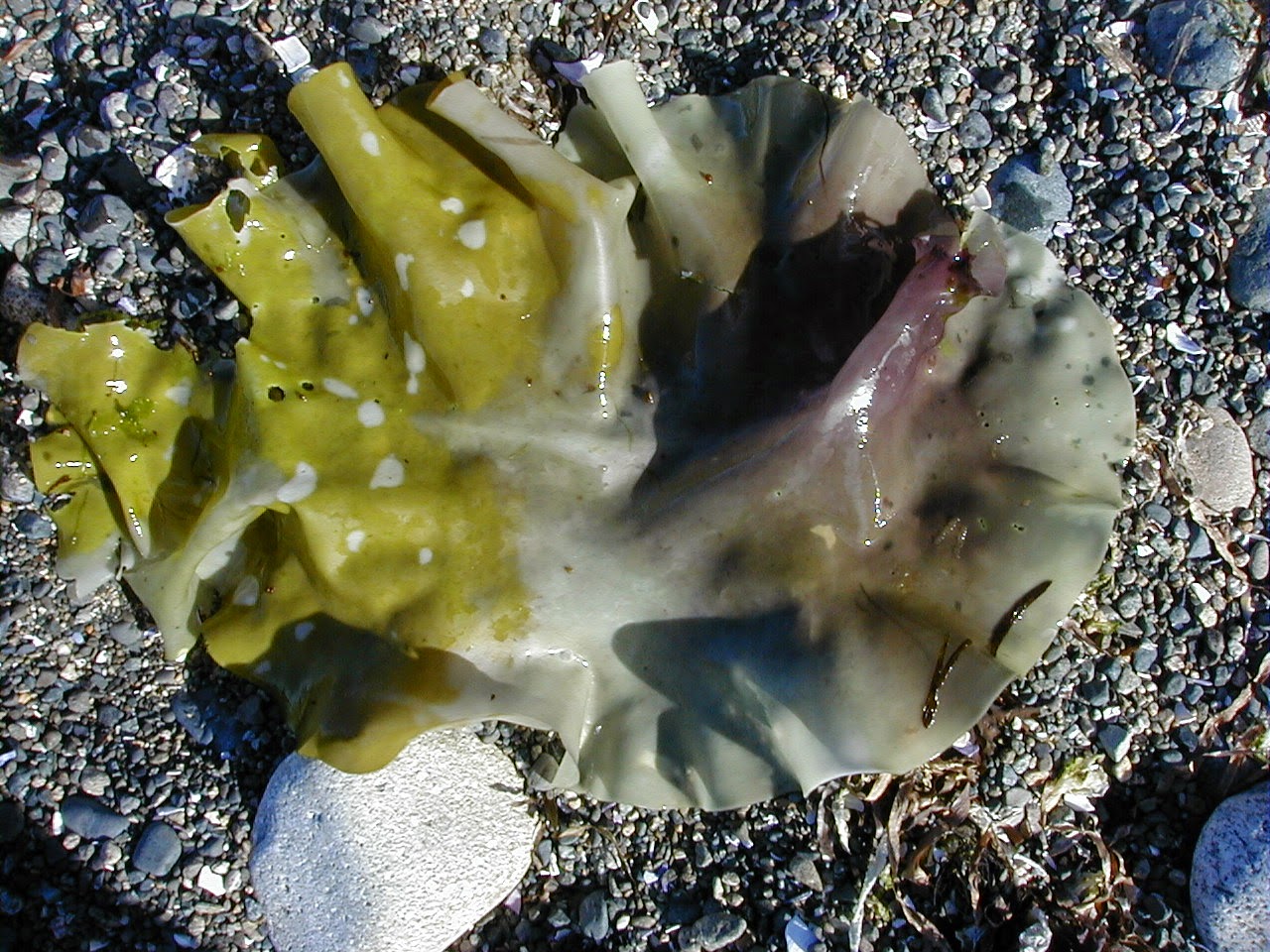 The sea weed in the photographs illustrates some of the more dramatic surface effects that can be produced with the correct yarns, weaving structure and finishing techniques.  High energy yarns or yarns that have different shrinkage rates can be used to distort an otherwise flat grid. 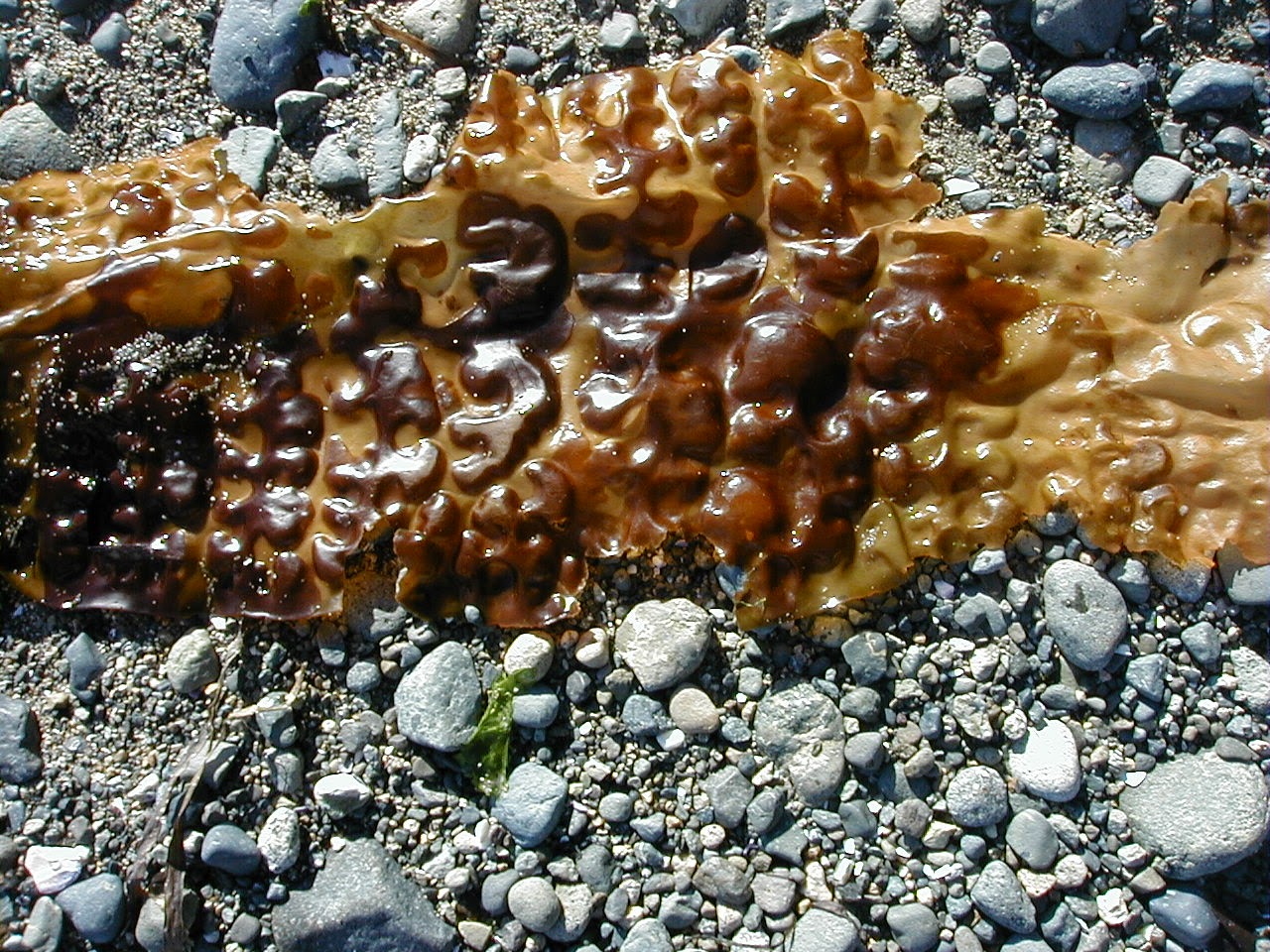 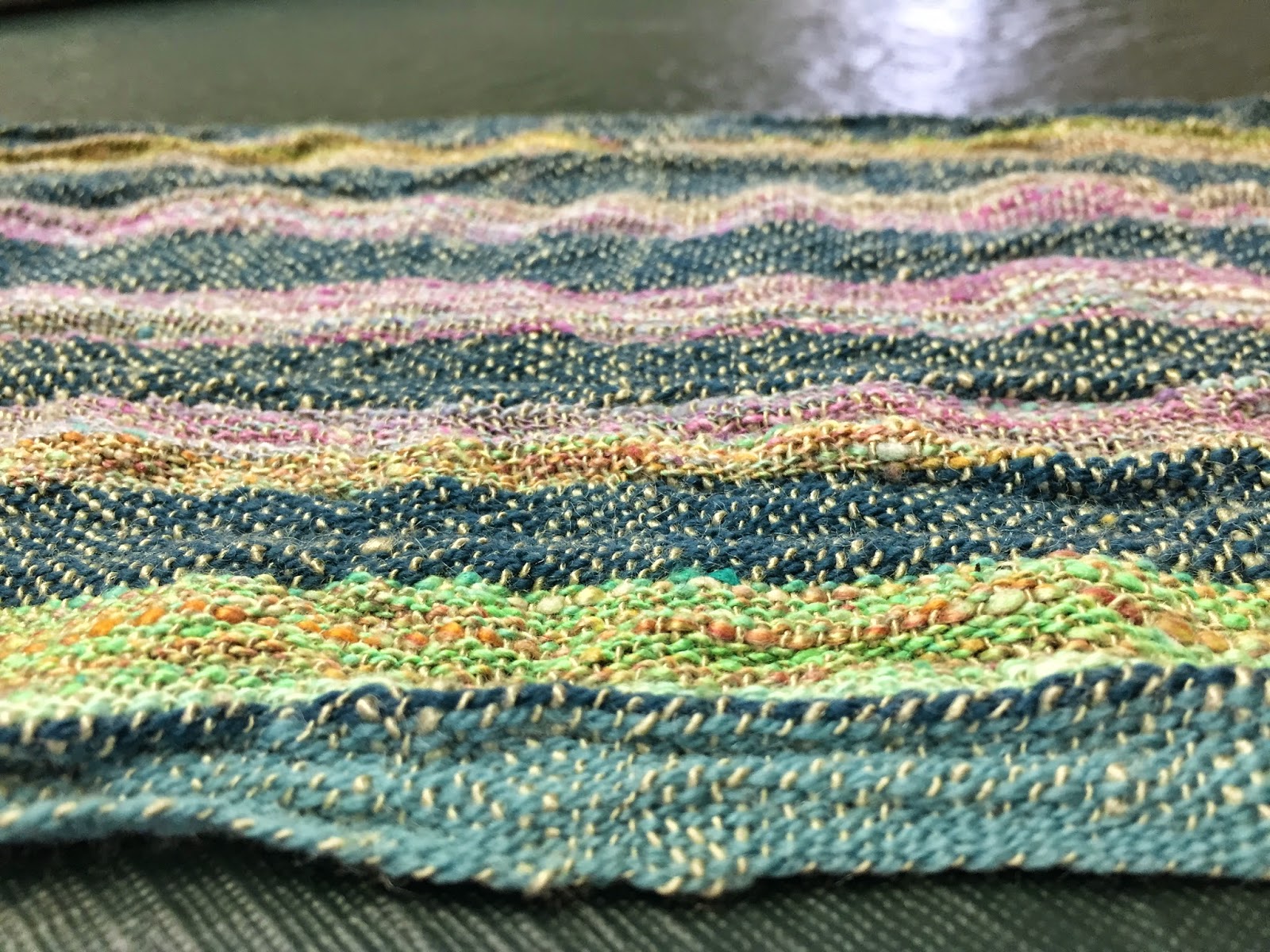 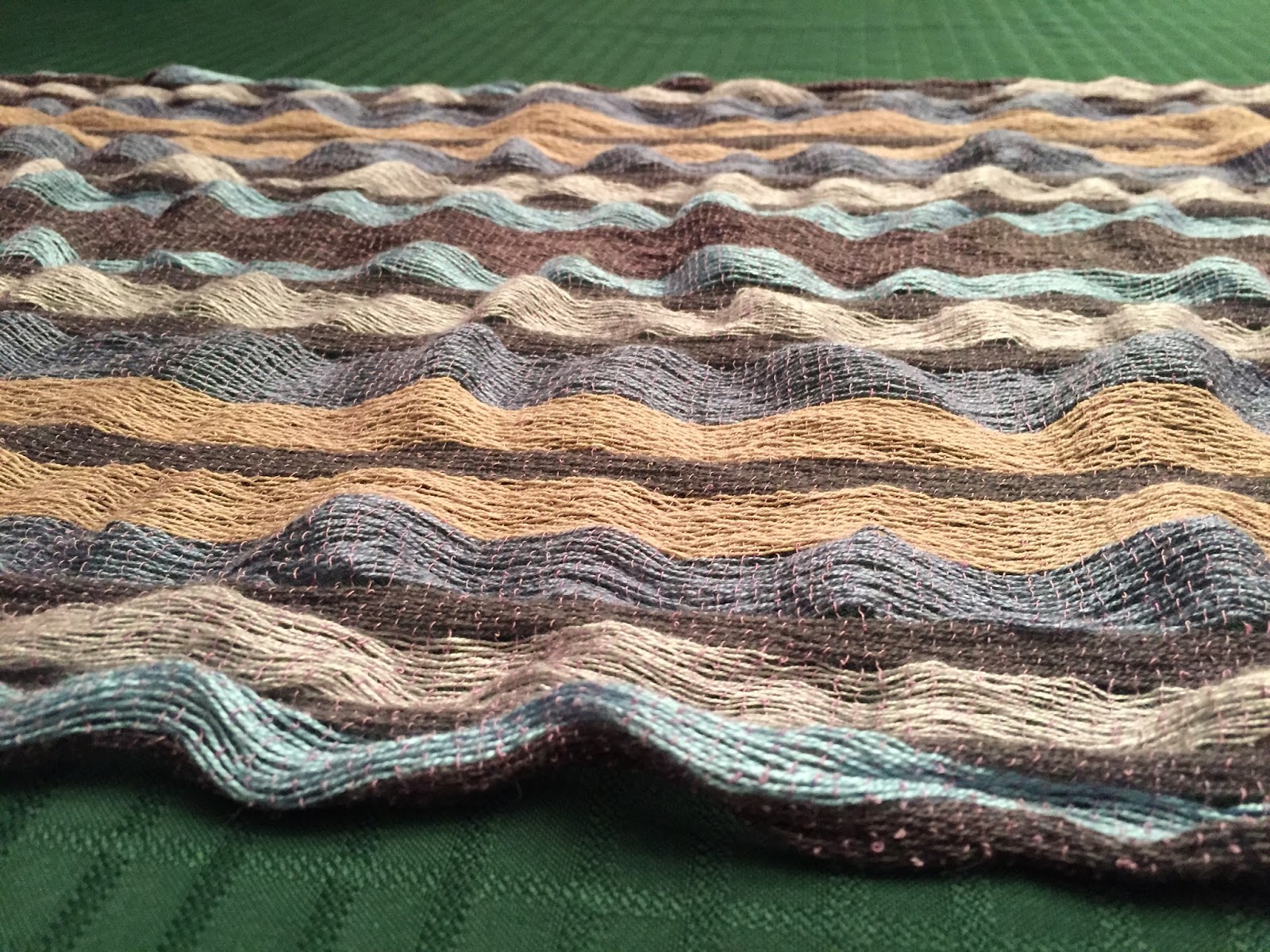 The woven examples have warp stripes of materials with different shrinkage rates.  In both samples the wool stripes shrink more than the adjacent stripes creating a seer sucker effect.
The highly spun rayon singles in the example on the left kinks upon wet finishing in hot water and pulls in the edges to form pleats.
We learned that it was important to do samples when working with these techniques.  Differences in sett, materials and finishing can make dramatic differences in the overall size of the finished piece.


The off-white sample with the intense pleating is an example of woven shibori used with an acrylic yarn.  The shibori pull threads are used to create narrow pleats then the entire cloth is steamed to set the acrylic weft yarn.  After the pull threads are removed the fabric is highly elastic.  The lower edge forms a natural ruffle as there were no pull threads in that section.  The fabric is ideal for a narrow sleeve on a romantic top. 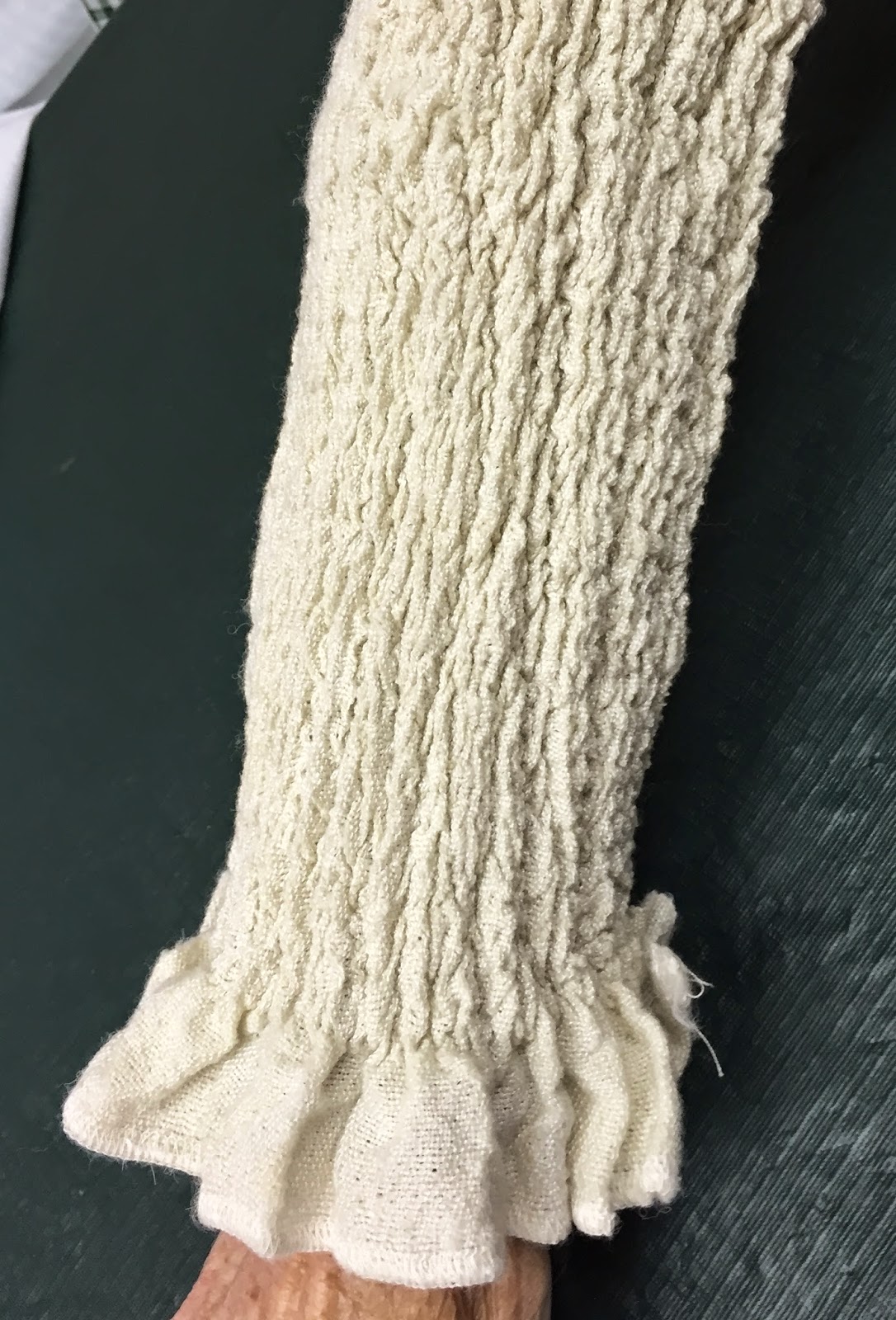 More subtle surface effects add textural interest as illustrated in this photograph of tree bark.  There are raised areas as well as irregularly coloured patches that resemble a collage 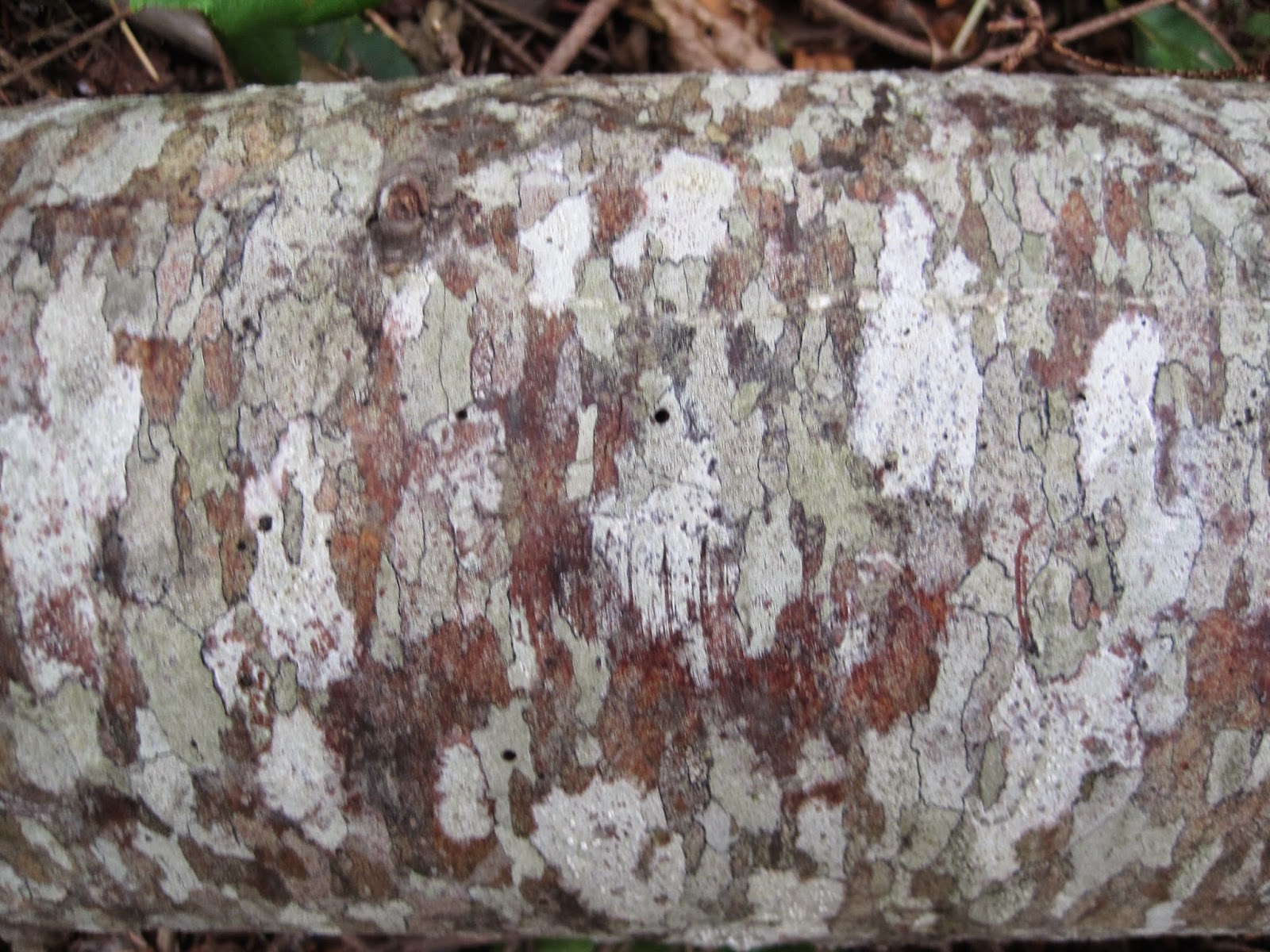 There are a number of weave structures that are designed to create surface effects and while the choice of materials can alter how dramatic the effect is, these techniques do not rely heavily on special yarns or finishing techniques.  They are often enhanced by the use of colour or fancy yarns. 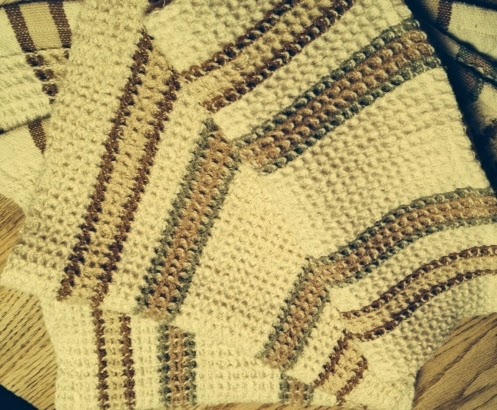 Waffle weave creates dimples in the cloth that appear as small squares.  The surface is similar to that on a Belgian waffle.  The weave structure is characterized by skips in descending order in the warp and the weft.  It is highly absorbent and makes wonderful towels.  The take up will depend upon the size of the units in the waffle weave and it can be considerable. 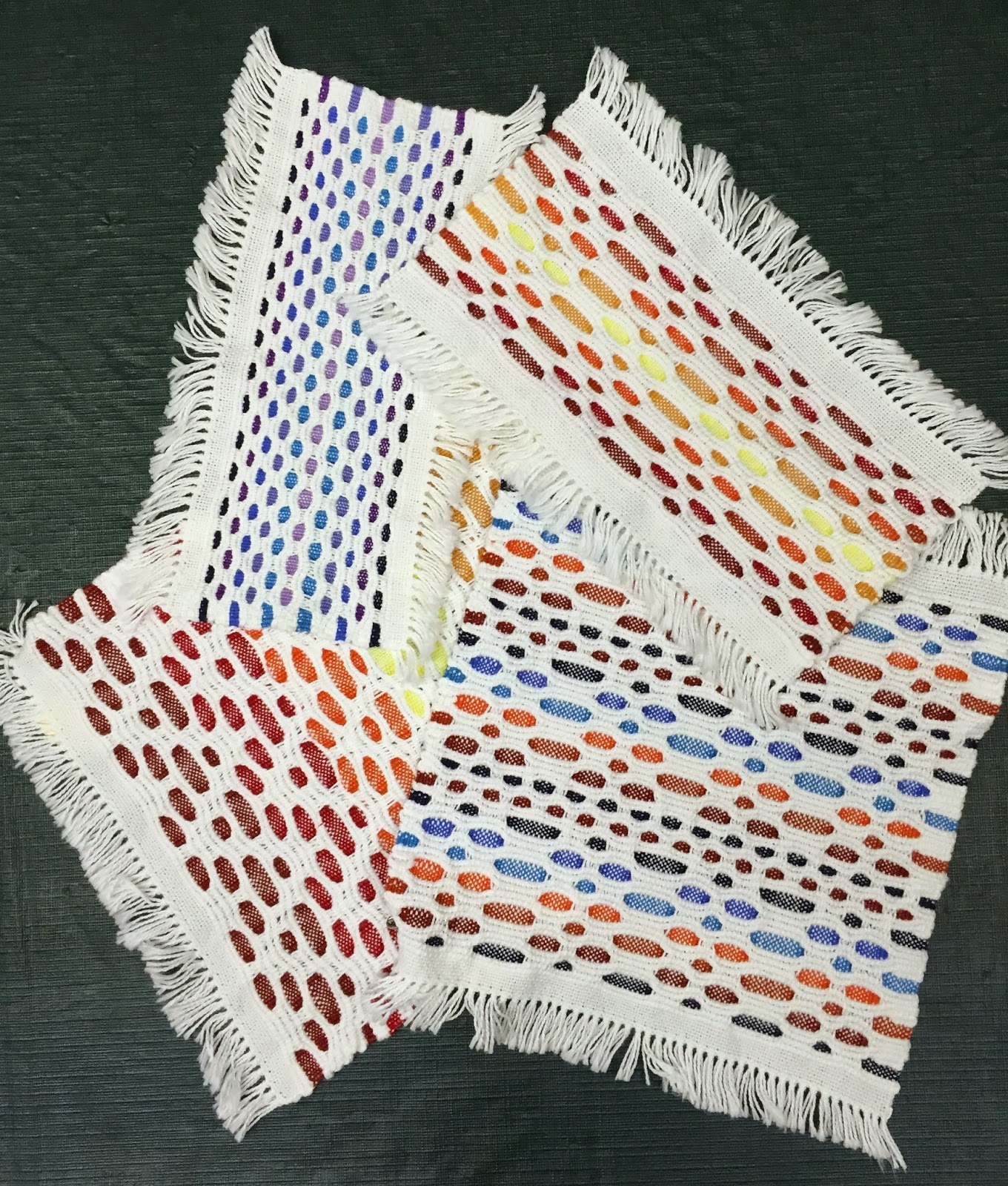 Honeycomb is another weave structure that creates dimples in the cloth outlined with a heavier or fancy yarn.  In this case the skips are on the back of the cloth making it more suitable for upholstery or an item that will be lined.  Where a deeper colour has been used the dimples appear to be deeper.

The More Than Four group will continue with the exploration of 3 dimensional effects.  Sampling has been important to understanding this topic and each person's experience, good or bad, has taught all of us a lesson.  The sampling has suggested some interesting applications for the techniques as clothing, accessories and house hold items.

Posted by Qualicum Weavers and Spinners at 3:00 PM No comments:

At one point in time we were all novices in our chosen craft.  Technical terms were a foreign language that we had to master before we could participate in a conversation.  We had to develop hand movements akin to writing and learn how to coordinate feet hands and head as you would in a sport.  There were calculations and ratios to memorize too.
Our early efforts were far from perfect.  Our hand spun yarn may have been both over spun and under spun along its length but the marvel was being able to move your feet so the wheel turned with a consistent speed and the fleece fed to the wheel formed a yarn that did not disintegrate.  My first efforts were a far cry from the lovely dyed yarn in the picture. 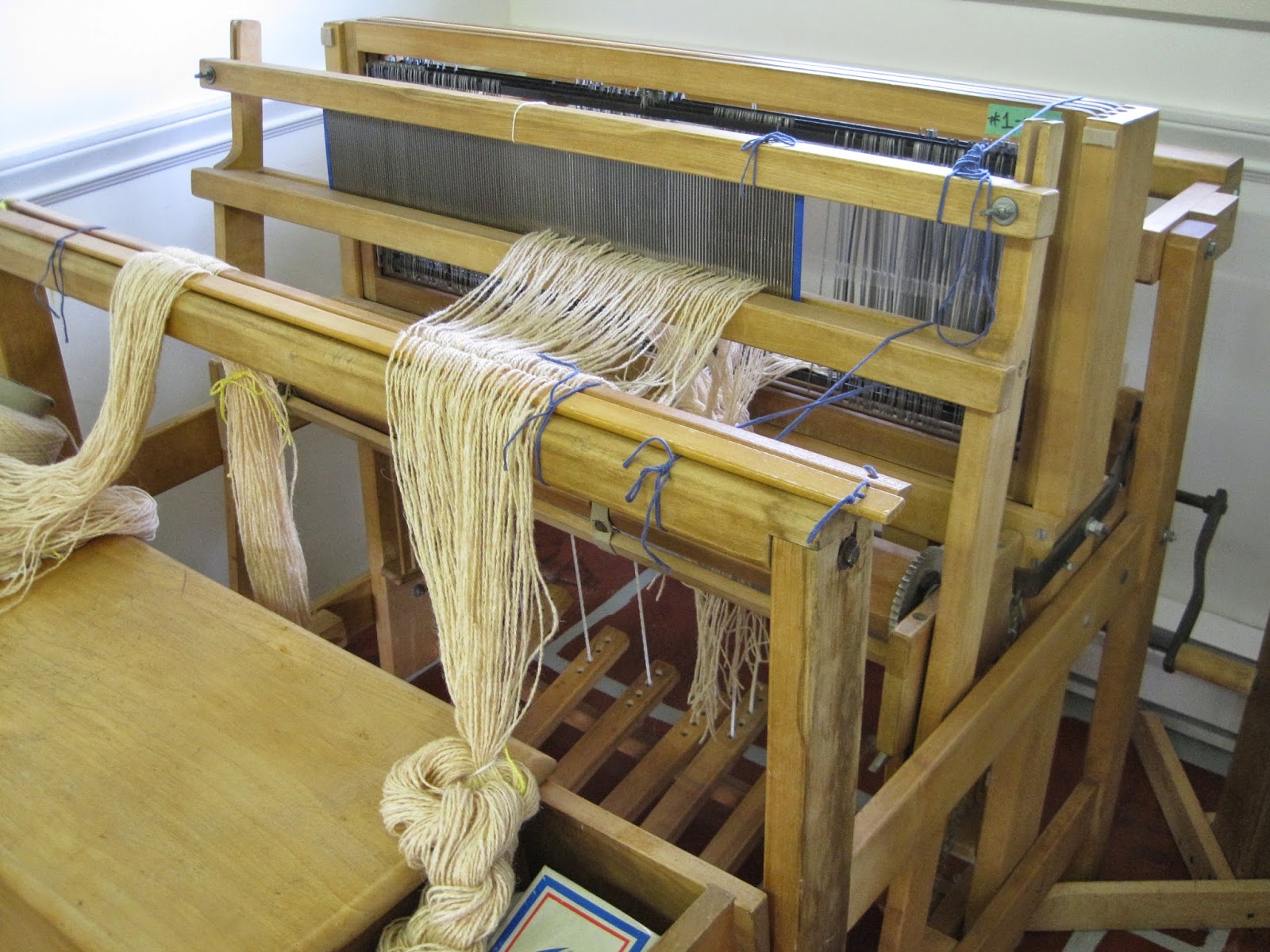 For new weavers the biggest challenge is dressing the loom.  In the beginning, it is like trying to dress an uncooperative 3 year old for a winter day.  At least the loom does not squirm around but at times the warp show signs of having a mind of its own.  There are tangles to separate, broken threads to mend and order to be made from chaos.  But oh the satisfaction when you have that perfectly aligned and tensioned warp just waiting to be turned into cloth.

At some time, we all made that first scarf from our own yarn.  It may have been a little thick and thin in places but we made it ourselves, from scratch and it deserves a place in our personal history.  Here's to the place mats with the slightly wavy edges, the mug rug made out of yarn so thick we could hardly thread the heddles, the too short scarf of unknown fibres we got from the thrift shop and all the other first projects that got us started. 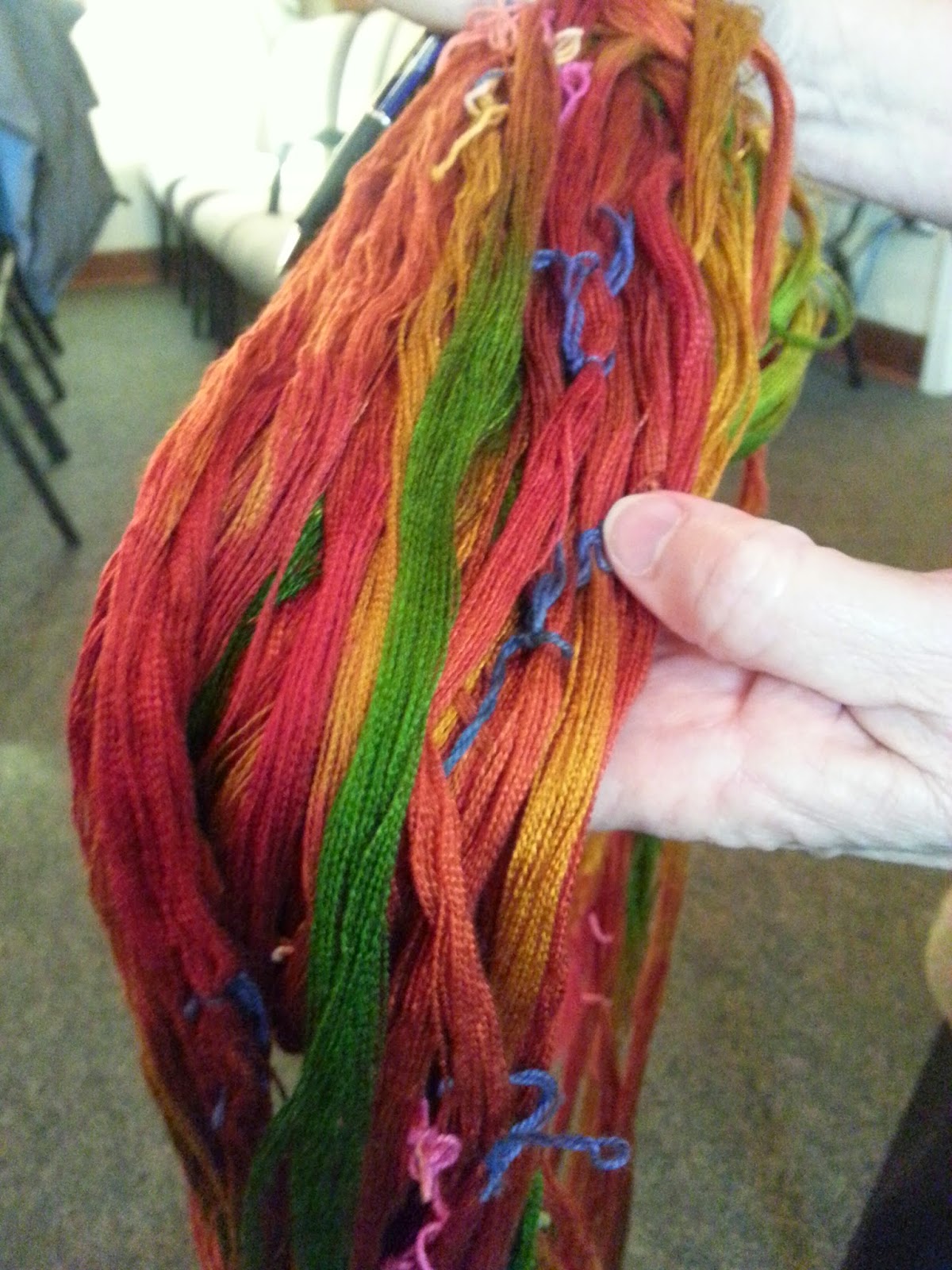 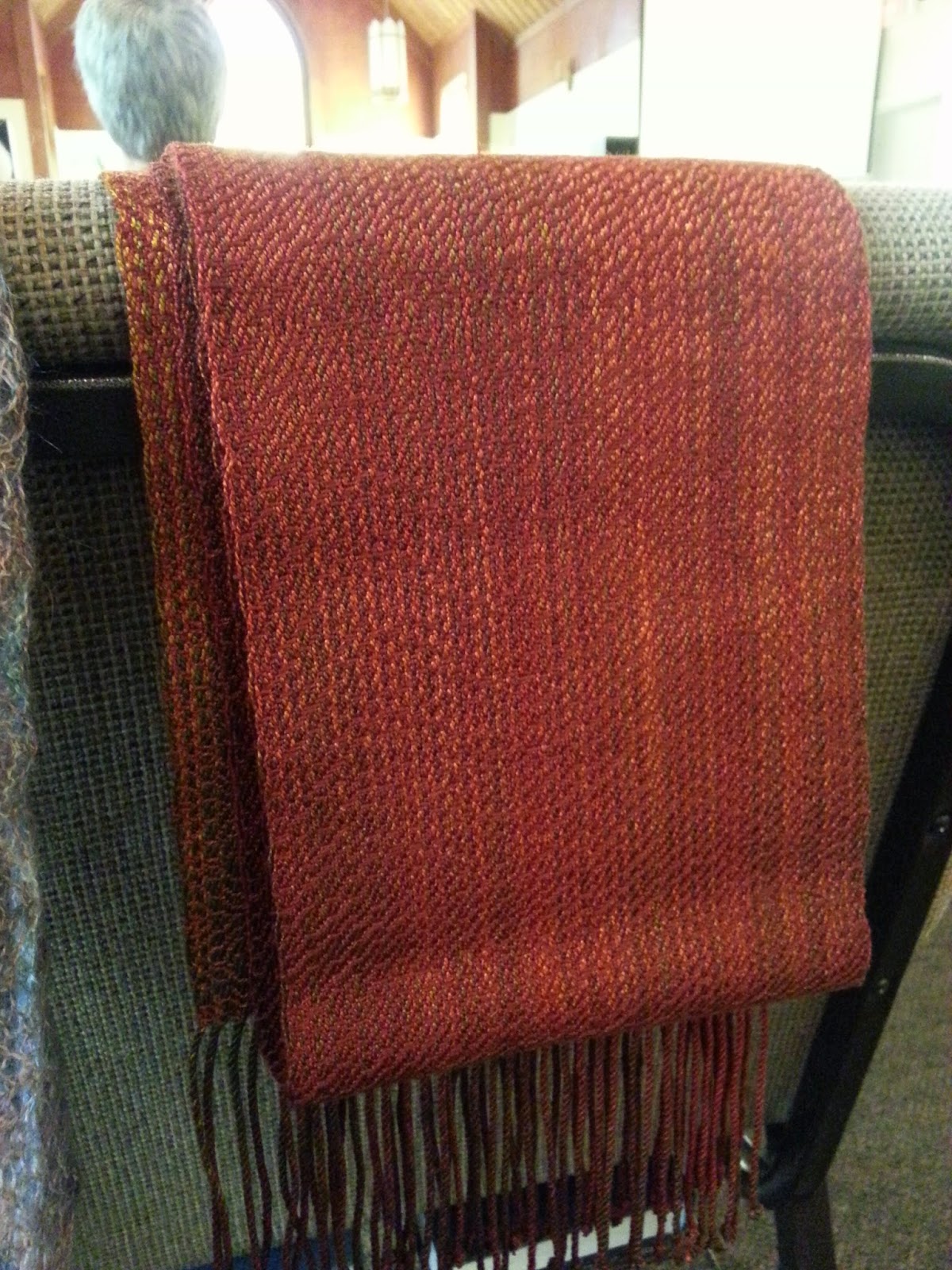 There is always something new to master no matter how long you have been working at your craft.  The dyed yarn in the photograph is the result of experimentation which is part of mastering a new skill.
The subtle colour variation in the woven shawl is another example of experimentation with dyes.  While these examples are lovely even experts have failures when trying something new. 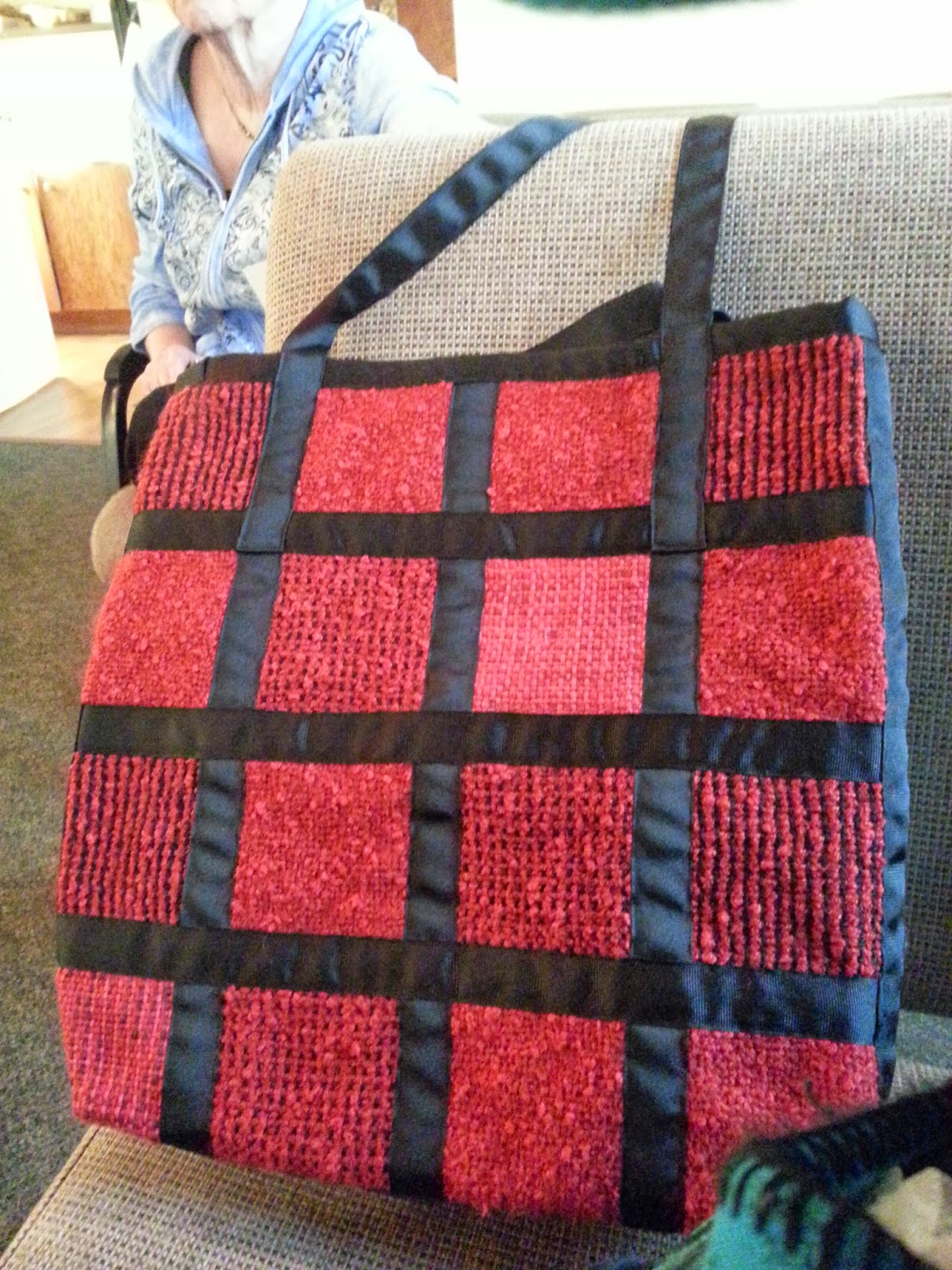 Don't assume everything you see is so difficult you can do it yourself.  This bag is made of squares woven on a simple loom then joined together with stripes of material for form a bag.  Even simple weaving can create something that has a very complex appearance.

So, in closing the next time you see a beautiful hand crafted item remember that the person who made that item had to start somewhere and they probably have some cherished but not so perfect items in their creative past.  The struggles and the mistakes they suffered were necessary so they could learn how to do it better.  Take pride in your early works.

Posted by Qualicum Weavers and Spinners at 11:10 PM No comments:

The Qualicum Weavers and Spinners Guild has been part of the Oceanside artisan community since 1991. The guild evolved from a small group of students of noted local weaver Elaine Duncan to over 50 members. The group promotes the fibre arts through information sharing, demonstrations and workshops. The group meets the fourth Monday of the month at Qualicum Commons in Qualicum Beach to exchange ideas and learn. Much of the learning occurs in the form of show and tell with individual artisans sharing their experiences. Study groups, workshops and mentoring all support the guild's goal of fostering personal growth in the fibre arts. The guild is a member of the Oceanside Arts Council, The Association of North West Weaving Guilds and the Guild of Canadian Hand Weavers.
Guests are welcome to attend our monthly meetings. For the schedule see Guild Events.
If you are interested in joining the guild please contact us by email as our regular meetings are on hold right now. We will take your information and contact you when activities resume.
CONTACT us at
qualicumweaversandspinners@gmail.com
See our member's gallery
LIBRARY LISTING

Elegant Threads is the annual show and sale of the Qualicum Weavers and Spinners.
It features one of a kind hand spun yarns, unique clothing, household linens and decor and whimsical creations. All of the items are hand crafted by members of the guild.
The sale takes place in November. Check this location for more information in the fall.

FALL & WNTER WORKSHOPS 2020
Weaving I, Intro to Weaving, Sandra Schulz, participants will learn to weave on a 4 harness loom supplied by the guild.
Dates, Oct 22 &29 1:00 to 4:00pm and Oct 31, 10 to 4:30 pm
Cost, members $140, non-members $200. ( plus material fee of $15 to be paid directly to the instructor)
A Tale of Two Seasons, Linda Wilson, participants will explore the basics of Summer & Winter on 4 &8 shafts and create a hand towel. This will be a virtual class using email, presentations and 5 optional zoom sessions. November date to be decided
Cost to members $30, non-members $40
Also in the works are
How to Plan a Project for novice weavers (November date)
Weaving II, a follow up to Introduction to Weaving (January date)
One Warp Many Towels, ( early 2021)
Unless otherwise indicated all workshops take place at Qualicum Commons, 744 Primrose St, Qualicum Beach.
Covid protocols will be in place and classes will be small so contact us soon if you are interested.
For more information contact us at qualicumweaversandspinners@gmail.com or lraven49@shaw.ca

General Meetings, We are not holding general meetings in person at this time. These meetings will take place via Zoom.

The following are some of our regular groups

2nd Wednesday of the Month 10 am to 1 pm, Fun with Four Weavers. The Fun with Four group are meeting via Zoom. Contact J. Worboys for more information.

4th Thursday of the month 1:30 pm to 3:30 pm, Exploring More Study Group. This group is communicating by electronic means and will regroup in September.

New Covid safety procedures apply to any activities with in the studio and in some cases access will be by appointment. Information will be circulated to members by the secretary. If you are a non-member and are interested in attending a meeting contact us via our email 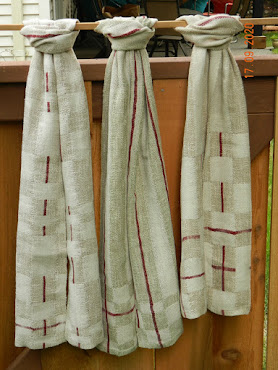 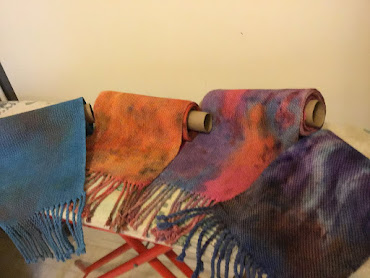 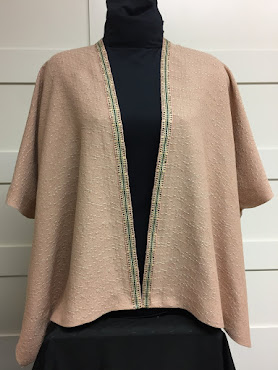